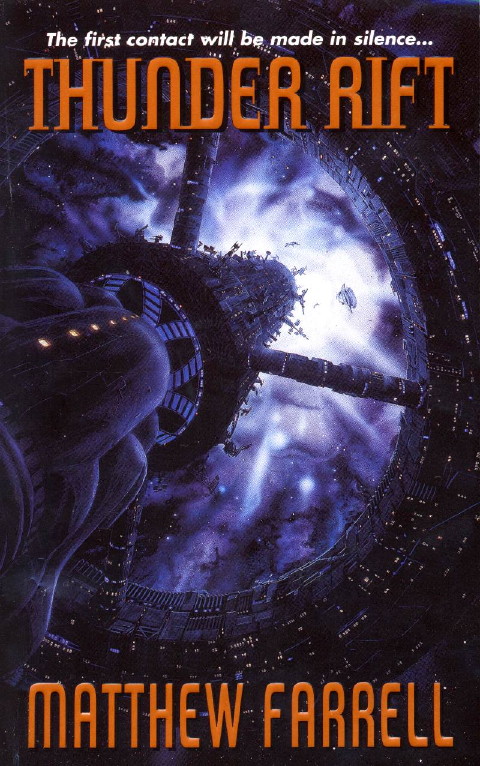 THE SHAPE OF SILENCE was originally published as THUNDER RIFT (by Matthew Farrell) through HarperCollins Eos in 2001 (see the first cover above). Matthew Farrell, I decided, was the older brother of S.L. Farrell, and died tragically, lost in a bog in Ireland... But I'll skip the sad tale of why I used a one-shot pseudonym here.

THUNDER RIFT also wasn't my original working title, which had been SILENCE. However, the marketing department at HarperCollins, in their infinite wisdom, said that my title was (and I quote them directly) "too quiet." They refused to use it. I really liked this book, and I'd always wished that I'd published the book under my own name and with the original title, which I still thought fit the theme of the book much better. So I was pleased when Shahid at Arc Manor / Phoenix Pick, who had brought DARK WATER'S EMBRACE and SPEAKING STONES back into print, wanted to do the same with THUNDER RIFT, and wanted to restore my name and my title to it -- though we decided, mutually, that SILENCE alone wasn't quite catchy enough. Thus: THE SHAPE OF SILENCE.

I will say that THUNDER RIFT / SHAPE OF SILENCE was fairly well-received, as the reviews below indicate indicate. Why not grab a copy and read it?

"Thunderously good... Everything you could ask for in a science fiction adventure: a believable, complex protagonist; a brilliantly conceived alien society; and a well-paced story that never drags... It's hard to imagine a sequel that could top the original." -- John C. Snider, SciFiDimensions

"Farrell gives us aliens that are both convincing and intriguing, and more importantly, who are different from human beings in ways that resonate with the deepest parts of ourselves." -- Greg Beatty, Strange Horizons

"Exceptionally well crafted. The story arises, as the best ones usually do, from the unique interplay between people and places... THUNDER RIFT is an excellent novel... " -- Elizabeth Barrette, Spicy Green Iguana

"...a fascinating study of an alien race and an alien viewpoint. Farrell is a much better writer than I am a reader." -- Eric Lindsay, Gegenschein

"Farrell infuses his novel with a powerful message: there is no growth without change... scores a hit..." -- Kristin Chin, The Davis Enterprise (Davis, California)