I love maps! I used to draw maps of imaginary places as a child. I have books of maps on my bookshelf. I pored over Tolkein’s map of Middle Earth when I first discovered his work. I’ve made maps for several of my own books, as they help me visualize where my characters are in the world and how they might have to move to get elsewhere and what they might encounter/see along the way. I’ve made maps whenever I’ve run an RPG game for friends. I’ve created maps in pencil, in ink, in mixed media, and via software programs like Apple Pages and Adobe Illustrator.

I like having a map of places I’ve visited. I have a large and lovely detailed map of 1835 London that I bought while visiting the Museum of London, framed and on the wall of my office. So no gallery of my artwork would be complete with some maps. So here are a few maps (but by no means all that I’ve made).

The map of Talamh an Ghlas is from HOLDER OF LIGHTING, the first book of the CLOUDMAGES trilogy (done in Adobe Illustrator). The map of Nessantico City is from A MAGIC OF TWILIGHT, the first book of the NESSANTICO series, also via Illustrator. The map of Albann from A FADING SUN began life as a pencil and ink drawing outline, photographed and brought into Pages where the text and other adornments were added. The Canis Lupus map is from AMID THE CROWD OF STARS, done entirely in Pages.

The map of Auremundo was drawn in ink and is the world map from a long-running RPG D&D-like game I created and ran for several years. I would go on to make up detailed maps of certain areas when I set campaigns there (as with the “Verdigard” map at the bottom of this page, which encompasses the upper left quadrant of the Auremundo map). For the overall Auremundo map, the areas that appear too white on the map are where I (stupidly) used WhiteOut to cover up mistakes or make some small changes—those areas unfortunately stand out far too much, since as paper yellows with age, WhiteOut remains stubbornly white. The hatched sections are mountains; the darker areas are heavily forested. The Verdigard map is ink, watercolor, and colored pencil, with the green areas being heavily forested. 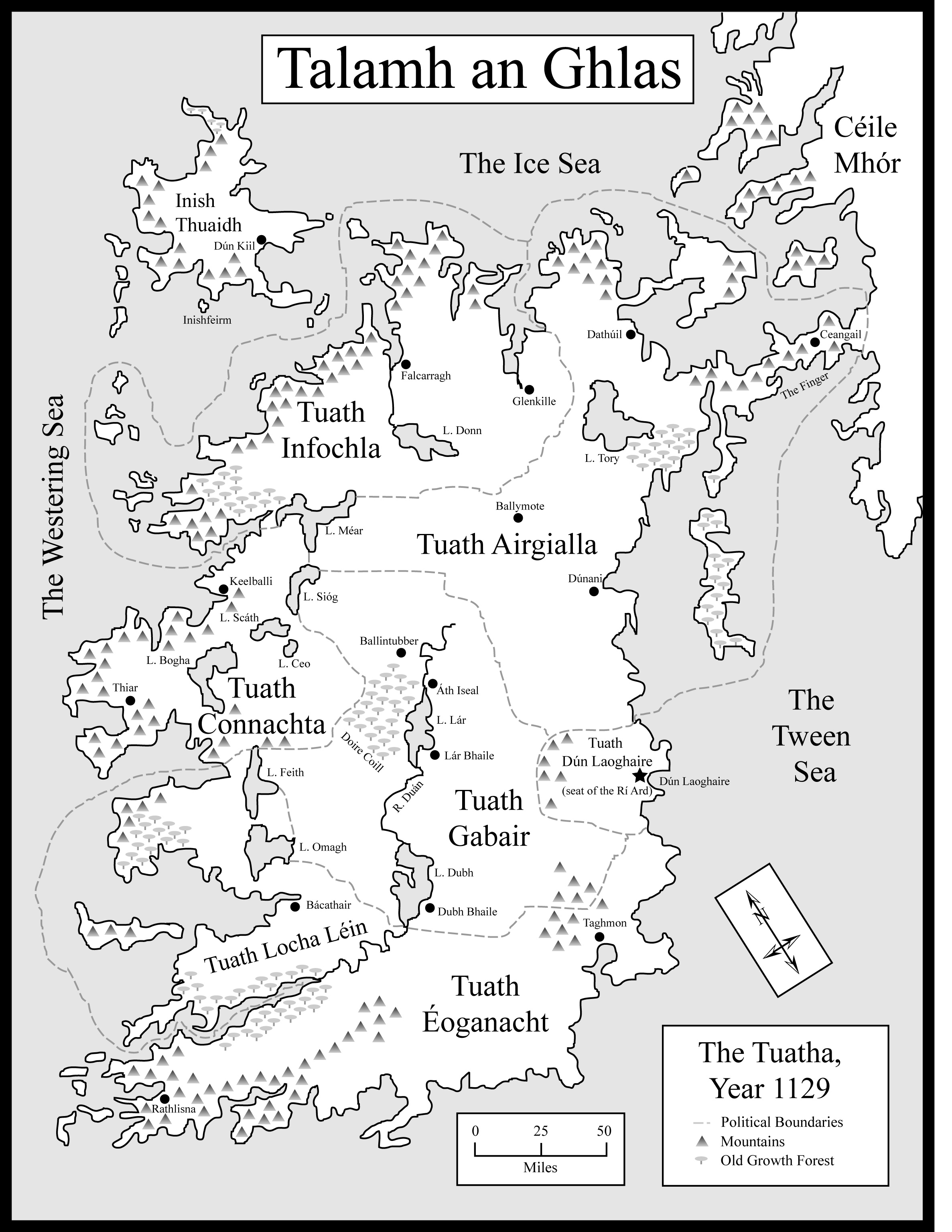 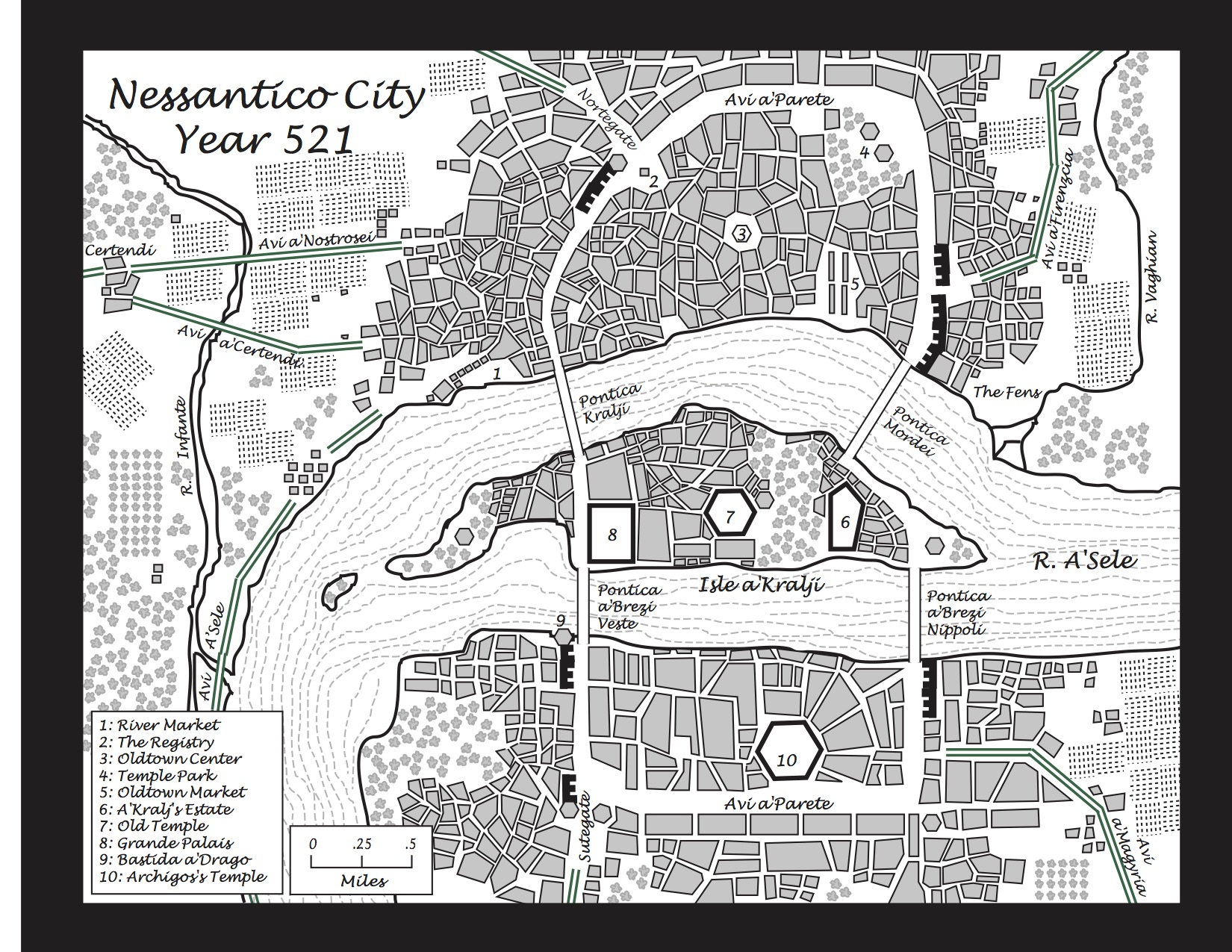 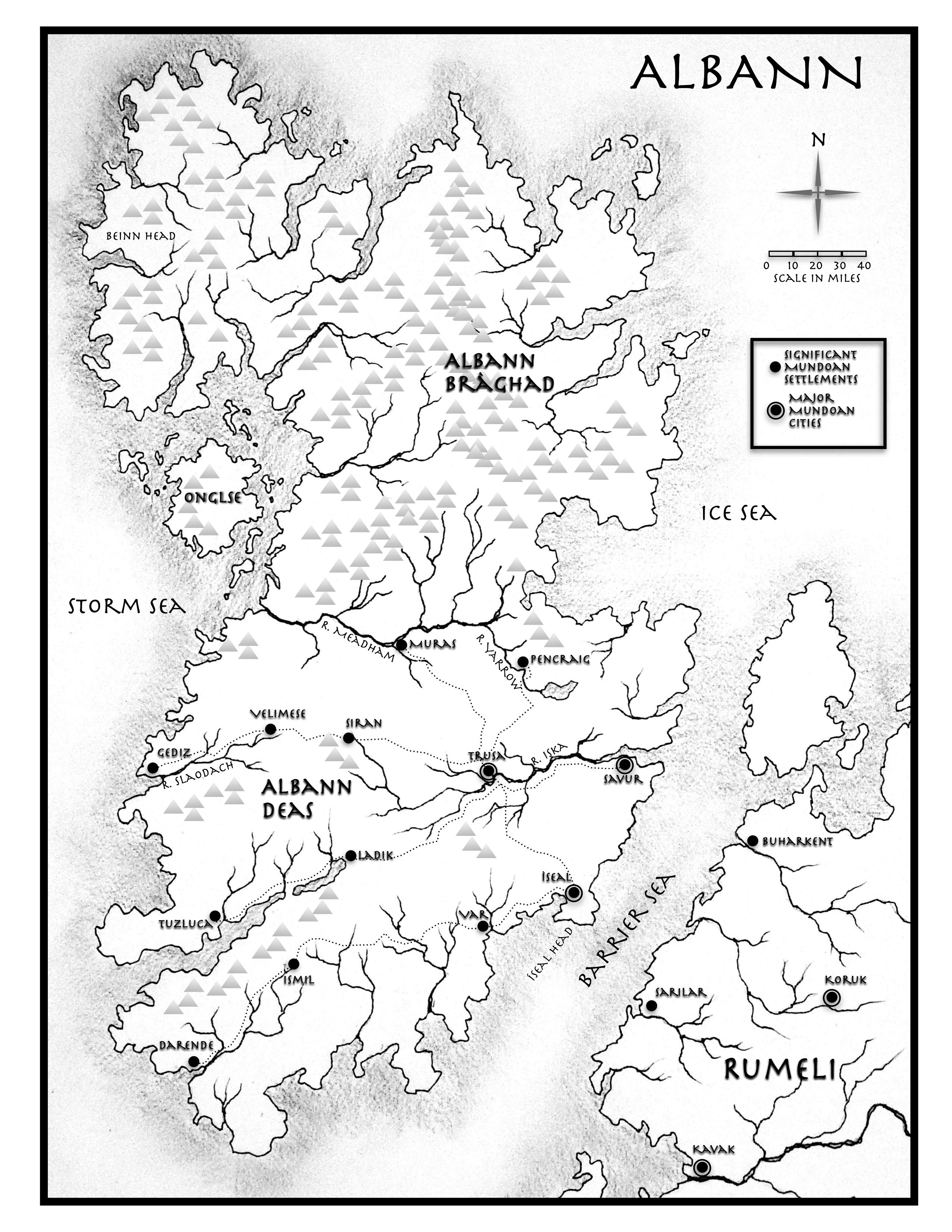 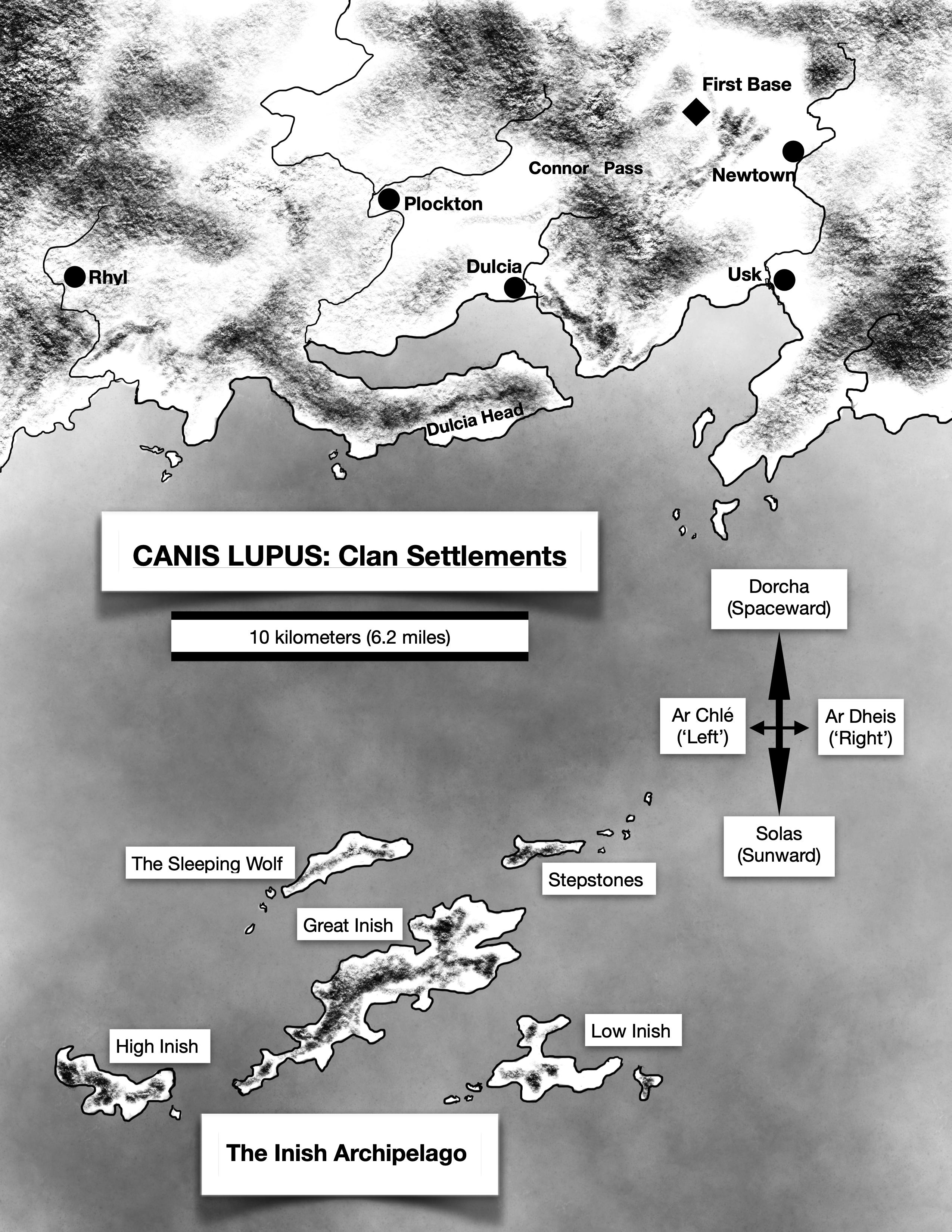 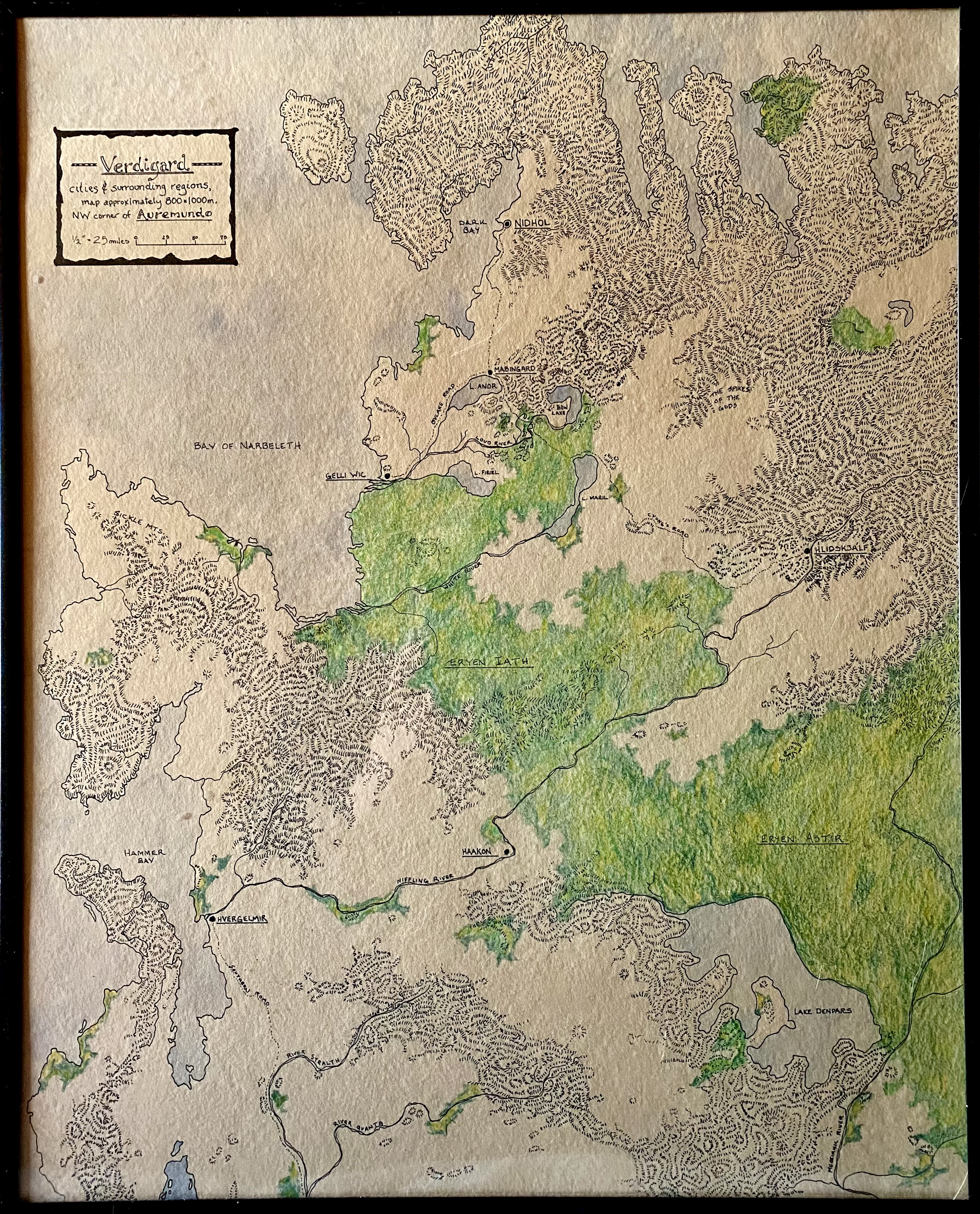